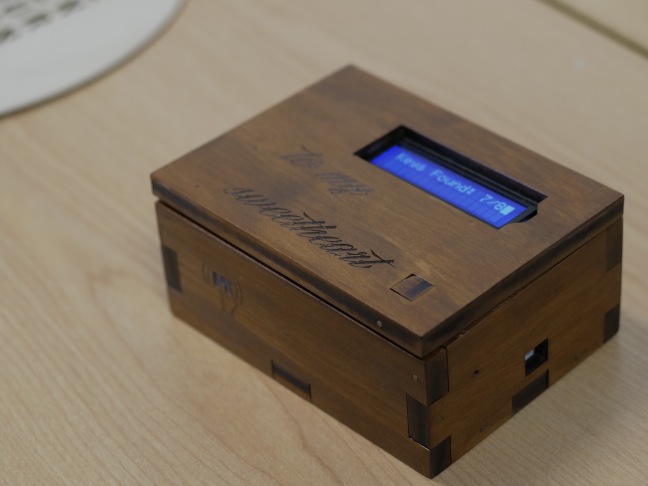 Proposing can be a difficult for any man. Choosing a ring, finding the right time, having the confidence to know she’ll say yes. Coming up with a unique method of proposal is even harder.

Inspired by a friend who had done something similar (using GPS as opposed to RFID), I decided to create a puzzle box which required a number of contactless keys before it would open.

The circuit itself was quite simple, based around an Arduino UNO, I used a basic RFID reader, electronic lock, and LCD display, all powered by a 9V battery.

I spend a good amount of time trying to choose the best box, but in the end I chose to build my own to my own requirements. This also allowed me to design in a special hook to allow the locking mechanism to work (much simpler than retro fitting something into an existing box).

After turning the box on using the switch at the rear of the box, the LCD begins to print a message to the recipient. This also includes the first clue to find the first key. Waving the first key (RFID card) in front on the box, will activate the second clue and so on.

Once the last card is found, the box unlocks, allowing it to be opened.

As the box only needed to last a single day, there were a number of minor issues:

Overall, the project was a success, and I got the much desired YES. So now this box sits on the shelf as a reminder my very geeky proposal.